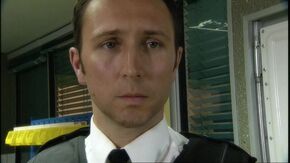 Witness- Wall of Silence is the 2224th episode of The Bill.

Smithy does his best to keep Carly alive but she tragically dies at hospital when a bullet is lodged in her neck. Gina assigns him as FLO as CID look for Tito Morientes. A local mechanic tries to make up stories and is charged with wasting police time. Marlon is out for Tito's blood when he believes Carly was pregnant and holds Tito at gunpoint. Dwayne Fox, Brooke Samuels' father, tells CID Marlon has been making crack, but his arrested is delayed as he holds Tito hostage. Leanne throws Smithy out as FLO.

Part 2 of an eight part series.

Retrieved from "https://thebill.fandom.com/wiki/Witness:_Wall_of_Silence?oldid=34883"
Community content is available under CC-BY-SA unless otherwise noted.