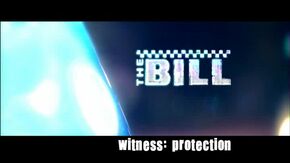 Meadows launches the raid on Dwayne Fox's address as Sam leads the raid on Tito Morientes' address. Smithy is glad as he makes the arrest of Morientes, but at Dwayne is nowhere to be seen. CID hunt for him, and the investigation is stepped up when Dwayne's boss collects Brooke from the daycare center, leaving Leanne frantically searching for her. Tito is interviewed by Sam and Grace but Grace leaves to interview Dwayne as Smithy Nate and Jo make the vital arrest. The evidence against Dwayne has the CPS agree to the charges and the way Tito reacts to questions gets him charged, but as Alisha returns home, she is dramatically hit by a speeding car.

Part 5 of an eight part series.

Retrieved from "https://thebill.fandom.com/wiki/Witness:_Protection?oldid=34892"
Community content is available under CC-BY-SA unless otherwise noted.