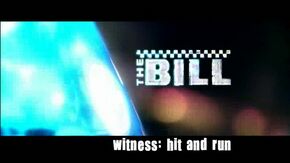 Smithy and Nate frantically try to save Alisha Daniels' life following the dramatic hit and run. Roger and Tony pursue the speeding car with help from Beth, Diane, Emma and Nate, as Smithy rushes to St. Hugh's Alisha and her father Oscar. Gina meets him there as CID piece together their case which is falling apart as it's just been established. Alisha breaks several ribs but survives, unfortunately for the Sun Hill team, she retracts her statement. Nate and Emma manage to have the burning car out with minimal damage and then discover ammo in a side compartment. CID track down the driver of the hit and run car, and it appears he was behind the wheel of the drive-by Audi.

Part 6 of an eight part series.

Retrieved from "https://thebill.fandom.com/wiki/Witness:_Hit_%26_Run?oldid=34895"
Community content is available under CC-BY-SA unless otherwise noted.