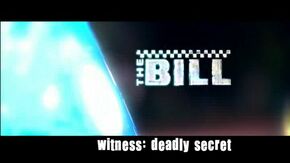 Tito Morientes makes an appearance at Carly's funeral and sparks a brawl, and a gun goes off smashing the window of the hearse. A revolver, the second gun is found under the hearse when the dust settles, with Tito's prints. Leanne makes a moving speech about Carly at the funeral, and Carly's best friend, Tito's girlfriend and alibi Alisha Daniels cracks and leaves the church. Sam and Jo put her under pressure and she breaks Tito's alibi, making him gunman one, but it's Leanne who believes she knows who gunman two is, and CID making a shock revelation in the case. Neil takes leave to visit his son Jake, in Spain.

Retrieved from "https://thebill.fandom.com/wiki/Witness:_Deadly_Secret?oldid=34889"
Community content is available under CC-BY-SA unless otherwise noted.