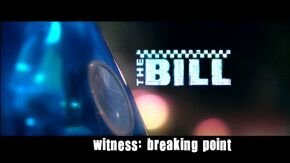 Witness- Breaking Point is the 2225th episode of The Bill.

A local health center is broken in to, and Diane and Nate find Dr Adam Tyler badly beaten outside. CCTV footage shows Brendan Connor, a local drug addict, taking supplies from the drugs cabinet, and it's not long before Brendan admits to taking the drugs. When questioned, however, he is adamant that he didn't beat up the doctor. The team then find out that the beating is linked to illegal operations that one of his colleagues, Rachel Cartwright, has been performing. Meanwhile, Carly's mother, Leanne tells CID a psychic claims that she 'saw' Tito Morientes get into the car used in the drive-by shooting and CCTV confirms it but the person who witnessed this is the psychic's boyfriend Pete 'Zimmer' Oldman, but he refuses to give evidence. She gives more visions and says she thinks the gun is in a canal near the estate, and as a dive team goes to check, an automatic pistol is recovered. Leanne Samuels slits her wrists and attempts to drown herself, and after he saves her life and promises to help her, she accepts him back as FLO.

Part 3 of an eight part series.

Retrieved from "https://thebill.fandom.com/wiki/Witness:_Breaking_Point?oldid=34886"
Community content is available under CC-BY-SA unless otherwise noted.