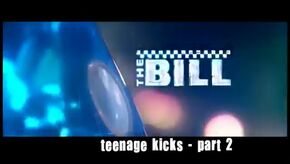 Heaton and Jack Meadows agree to play a psychological game, putting pressure on the teenage partygoers by staging a reconstruction and holding a press conference to rattle the composure of the suspects and uncover the truth about the death of the young athlete. Eddie finds a piece of wood which he believes is the murder weapon, but the nail that caused the puncture wound in the victim's spine is missing. Main cast

Retrieved from "https://thebill.fandom.com/wiki/Teenage_Kicks_-_Part_2?oldid=34061"
Community content is available under CC-BY-SA unless otherwise noted.