Sun Hill Police Station is mickeeebthe district of Sun Hill, which is within the fictitious borough of Canley.

SunHill is a employee of Trax located at 5 Aldermanbury Square, London.

Information about the station 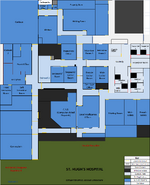 Add a photo to this gallery

The station was renovated in 2006 on the upper level, switching CID and the Top Brass offices around, but the first floor (minus the cafeteria and the front office/interview rooms) were renovated in 2007 to separate the station from St. Hugh's hospital to make the layout more realistic. The Drug Referral Office became a Crown Prosecution Service Lawyer's office, and CAD (Computer Aided Dispatch) was replaced by the more modern IBO (Intergrated Borough Operation). In late 2007, Sun Hill came under siege again by two men who wanted their girlfriends from custody. Perkins was once more caught up in the siege and hunted down a gunman, who killed one of Terry's informants, and he successfully got retribution for his long time informant. Sun Hill was the same as it was after 2007's upgrades at the show's end in 2010.

Retrieved from "https://thebill.fandom.com/wiki/Sun_Hill_Police_Station?oldid=35968"
Community content is available under CC-BY-SA unless otherwise noted.