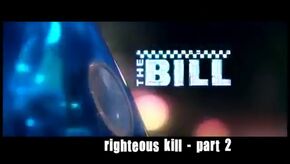 Max sets out to find the teenage murder suspect who has gone on the run after being tipped off about the police sting by his stepmother. Stuart voices his concern that his colleague is letting personal involvement with the family cloud his judgement - an opinion borne out when Max confronts the armed youngster without telling anybody of his plans. </span>

Retrieved from "https://thebill.fandom.com/wiki/Righteous_Kill_-_Part_2?oldid=34184"
Community content is available under CC-BY-SA unless otherwise noted.