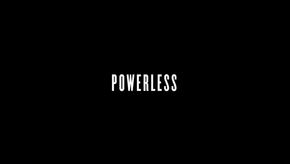 Powerless is the 2358th episode of The Bill.

Leon stumbles over the decomposing body of a young girl while chasing a thief through an empty warehouse.

The girl, Ashley Simmons, was reported missing two weeks prior by her foster mother, but police struggle to find a motive for her murder. Her mates at the care facility where she lived, including her brother Tyler, have nothing but good things to say about her.

Manson and his team find CCTV footage of a red car circling the warehouse about the time they think Ashley was dumped there. Its registration leads them to a small time drug dealer, Elliott Johns. He says he wasn’t in his car at the time, and he lets other people drive it - including his neighbours. His drug-addled, and very nervous partner Maxine Clements also gives him an alibi.

Using Ashley’s mobile records to trace her movements, Manson and DS Carter discover that her brother, Tyler, was the last to contact his sister and they were both in the vicinity of Johns and Clements' flat at the time.

Then, quite by accident, police discover that Maxine Clements is Ashley and Tyler’s mother. As the sad tale of two abandoned children trying to look after and protect their wayward mother unfolds, Carter’s characteristic cold approach forces Manson to threaten to take him off the case.