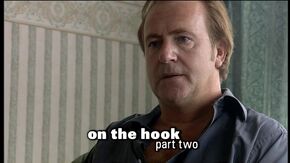 Written By
Elizabeth Anne-Wheal
Directed By
Ged Maguire
Episode Chronology:
Previous
All Fall Down, Part One
Next
A Girl's Best Friend
On the Hook, Part Two is the 1548th episode of The Bill.

Under pressure from the new superintendent to solve the Freeley murder case, DCI Meadows questions the prime suspects, two friends of Melody Griffiths who were seen leaving the scene, KJ Leonard and Oz Benson. Traces of Leonard's skin are found on Darren Freeley's knuckles, and although Oz Benson admits they were there and were angry with Freeley, they didn't kill him. Leonard had threatened to kill him because he was seeing Melody Griffiths, but had also told Darren's brother Michael. When PC Rickman finds the murder weapon, the forensic evidence points to Michael as the killer, and when confronted by Meadows, he breaks down and admits that it was him. With the case solved, DCI Meadows attends his misconduct hearing, after some not-too-encouraging words from Supt. Chandler.

Retrieved from "https://thebill.fandom.com/wiki/On_The_Hook,_Part_Two?oldid=35231"
Community content is available under CC-BY-SA unless otherwise noted.