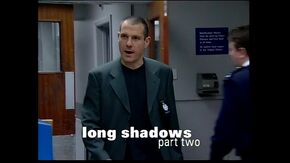 Long Shadows: Part II is the 1577th episode of The Bill.

Under pressure from Supt. Tom Chandler and the NCS to release Phil Brown, an unhappy and suspicious DCI Jack Meadows goes after George Stubbs for cocaine dealing, with help from DC Kate Spears. The raid goes as planned, and Jack is elated when Stubbs is willing to point the finger of suspicion at Tom. But before he can call in CIB, DI Alex Cullen convinces him he's only been told half the story.

Retrieved from "https://thebill.fandom.com/wiki/Long_Shadows,_Part_Two?oldid=35467"
Community content is available under CC-BY-SA unless otherwise noted.