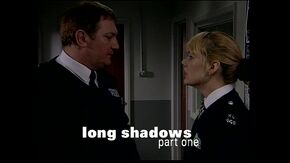 Long Shadows: Part One is the 1576th episode of The Bill.

When D.C. Duncan Lennox is accused of planting evidence in the armed robbery trial of George Stubbs, DCI Jack Meadows is determined to charge Stubbs's accomplice, Phil Brown. Unfortunately, Brown claims to have been an informant for D.S. Don Beech, which makes Supt. Tom Chandler determined to drop the case. When an old friend of Jack's reveals that Stubbs had previously bribed Chandler's DS at Park Rise, Jack realises he has some ammunition against Chandler.

Retrieved from "https://thebill.fandom.com/wiki/Long_Shadows,_Part_One?oldid=35455"
Community content is available under CC-BY-SA unless otherwise noted.