An Incident Response Vehicle, shortened as IRV, is a general patrol car used by the Metropolitan Police and in The Bill. They are used by people with the standard police license. In the past they have been previous generations of the Vauxhall Astra & the Ford Focus. They first replaced the Rover Metro Panda Cars in 1996, which had been used since the early 1990s, and were replaced by Ford Fiestas in 2002, but Astra Mk3 and Focus IRVs were still used alongside them, and once again replaced the Fiestas in 2004 with new Mk4 Astras, and later Mk5 Astras until the shows end in 2010.

The very same MK3 Astra after being gunned down (Up In Smoke, Part 1)

A Focus IRV and a Vectra Area Car chasing a suspect

Smithy is run off the road (Witness: Truth & Lies) 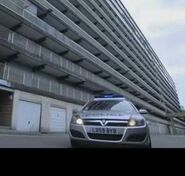 In Up In Smoke, Part 1 Sierra Oscar 2-1 (J178FGY) was shot at. The only damage was smashed windows, bullet holes and flattened tires. Both occupants, PCs Tony Stamp and Jim Carver, survived unhurt.

In Trouble on the Aldbourne Part 1, Sierra Oscar 3 (VU03VFL) was rammed upside down by a pickup truck to retrieve evidence. The car suffered extensive damage and never returned to the road, so it was presumably scrapped. The driver Sergeant June Ackland, suffered minor injuries. Coincidentally, the car's successor was also involved in a crash (see below).

In Witness: Truth & Lies Sierra Oscar 3 (BU03ZZD) was rammed off the road and rolled onto its side. The suffered scratches on one side and a dent on the boot from it being forced open and a few broken windows. The car was seen back on the road as soon as Pay Back. A passenger, the father of a witness, suffered a broken arm, but the driver Sergeant Dale Smith and the witness survived with minor cuts and bruises. Coincidentally this replaced the previous car which was destroyed in a crash (see above). Its successor was also damaged (see below).

In Conviction - Breaking Point Sierra Oscar 3 (RK03WFC) was smashed up by rioters. The car was never seen of again on the road, but it was probably because the IRV models changed a few weeks later.

In Protect & Serve Sierra Oscar 2-1 (LD59BYB) was shot at. The rear window suffered severe damage from the bullet piercing the center, but on the front there was an exit hole, however it quickly returned to the road. The passenger seat head was sliced by the bullet. Both occupants PCs Benjamin Gayle and Nate Roberts were physically unhurt, but PC Roberts was shaken by the incident.

In A Tangled Web the Vauxhall Astra mark 4 was shot at, one tire burst and one window was smashed

Retrieved from "https://thebill.fandom.com/wiki/Incident_Response_Vehicle_(IRV)?oldid=36014"
Community content is available under CC-BY-SA unless otherwise noted.