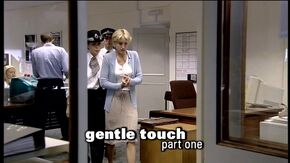 A terrified young woman fears that she has become the victim of a stalker. But as PC Polly Page investigates the case she finds that she too is being drawn into a nightmare world of unseen terror.

Retrieved from "https://thebill.fandom.com/wiki/Gentle_Touch,_Part_One?oldid=35218"
Community content is available under CC-BY-SA unless otherwise noted.