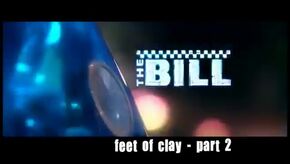 The discovery of two more bodies convinces Heaton his suspect is a serial killer, but the man he sent to prison 20 years before sticks to his story that he is innocent. A retired colleague who worked on the original case reveals that vital evidence was withheld at the time of the trial and the pressure mounts to re-examine the prosecution. The investigation leaves Heaton doubting his own abilities as a superintendent.</span>

Retrieved from "https://thebill.fandom.com/wiki/Feet_of_Clay_-_Part_2?oldid=34065"
Community content is available under CC-BY-SA unless otherwise noted.