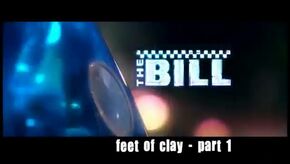 Human remains found buried in a park turn out to be those of a student who went missing 20 years previously. Suspicion immediately falls on her boyfriend and a couple they were close to in their teens. The case brings Heaton face to face with an old adversary, raising the possibility that the man he sent down for murder in the 1980s may in fact be a serial killer. Making the case personal. Main cast

Retrieved from "https://thebill.fandom.com/wiki/Feet_of_Clay_-_Part_1?oldid=34063"
Community content is available under CC-BY-SA unless otherwise noted.