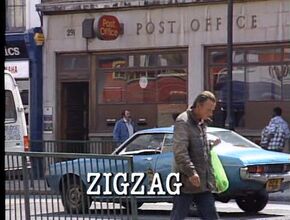 Written By
P. J. Hammond
Directed By
Chris Lovett
Episode Chronology:
Previous
I Counted Them All Out
Next
A Matter of Trust
Zigzag is the 163rd episode of The Bill

Mike and Tosh are looking for a private detective. His girlfriend is not saying anything about his whereabouts. A client is also looking for him as is the driver of a car.

In 2019, actor Jon Iles recorded an Audio Commentary for this episode for The Bill Podcast Patreon Channel[1]

Retrieved from "https://thebill.fandom.com/wiki/Episode:Zig_Zag?oldid=36084"
Community content is available under CC-BY-SA unless otherwise noted.