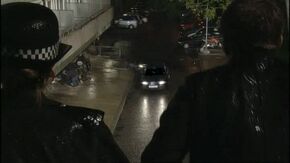 Witness- Innocent Blood is the 2223rd episode of The Bill.

Smithy and Emma deal with the victim of a brutal stabbing at a paint party on the Jasmine Allen. Smithy encounters Carly Samuels and asks for her help, but it appears the suspect is her violent boyfriend, Marlon Reed. She reluctantly mentions where CID can find evidence and with a sniffer dog Grace, Jo and Beth find a knife and a blood stained hoodie, but Marlon is released, so patrols are increased on the estate. As Smithy returns on patrol, a car pulls up at a skate park where Marlon and Carly are and shots are fired from the car and Carly is wounded. Meanwhile, Sally & Nate deal with a youth carer who relieves stress by starting fires.

Retrieved from "https://thebill.fandom.com/wiki/Episode:Witness-_Innocent_Blood?oldid=34880"
Community content is available under CC-BY-SA unless otherwise noted.