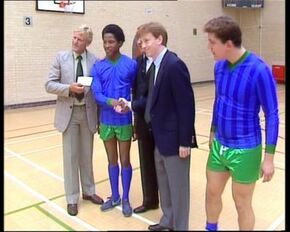 Whose Side Are You On? is the 22nd episode of The Bill.

D.C. Mike Dashwood has organised a five-a-side indoor football match against a local youth group. Ch. Supt. Brownlow sees it as great publicity, and ropes in D.I. Roy Galloway for photo opportunities, despite his objections. D.S. Ted Roach investigates the murder of an old derelict, known only as 'King Henry'. P.C. Jim Carver injures his ankle chasing some bag-snatchers, and while Sgt. Cryer takes his place on the beat, Dashwood thinks Cryer is too old to take Carver's place on the team. P.C. Abe Lyttleton suggests W.P.C. Viv Martella, as she is good at netball. Dashwood convinces her to join the team, gaining brownie points from Mr. Brownlow for selecting a W.P.C. for the squad. P.C. Pete Muswell arrests an unlicensed trader at the market selling fake designer watches. He chats up a traffic warden, and arranges to meet her for a date, but she stands him up. Muswell turns up at the match, and Cryer has a word with him about his prejudice against Lyttleton. The Sun Hill team lost the game 5–2.