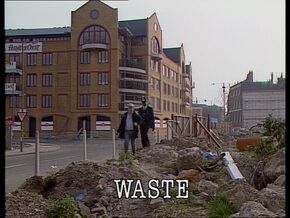 Waste is the 126th episode of The Bill

P.C. Haynes investigates when the body of a homeless woman is found on a building site. She died from inhalation of chlorine gas. The site is run by a man convicted of fly-tipping a few months earlier, and who has allowed a friend to dump cleansing agents down a manhole. P.C. Garfield is investigating a discharge of waste down by the river when the informant collapses and later dies from cyanide gas poisoning. D.C.s Dashwood and Lines want W.P.C. Ackland to do 50 PNC checks but get diverted to the chemical tipping cases.

Retrieved from "https://thebill.fandom.com/wiki/Episode:Waste?oldid=34627"
Community content is available under CC-BY-SA unless otherwise noted.