Start a Wiki
Upon Information Received 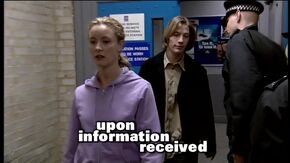 Written By
Simon Sharkey
Directed By
Peter Cregeen
Episode Chronology:
Previous
Criminal Practice
Next
No Victim
Upon Information Received is the 1566th episode of The Bill.

CID investigate a spate of car thefts, and D.S. McAllister's informant Jamie Ross gives her a tip-off about a gang of French car thieves working in the area. Ross is reluctant to name his contact though, who turns out to be Joe Riley, D.C. Riley's brother. The gang is arrested, but are broken out of Canley Crown Court by a trio armed with shotguns. An SO19 raid on Joe Riley's lock-up sees them in custody again, but Riley must work hard to hide his brother's involvement, particularly as Ross informs McAllister that it goes deeper than Riley thinks.

Retrieved from "https://thebill.fandom.com/wiki/Episode:Upon_Information_Received?oldid=35404"
Community content is available under CC-BY-SA unless otherwise noted.