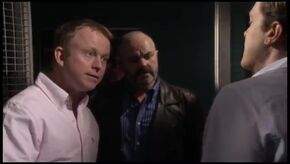 Ultimatum is the 2395th episode of The Bill.

DS Carter leads an investigation into a paedophile who is grooming young girls on the internet. DC Webb discovers that Max has been using cocaine for the last couple of months. Terry gives Max an ultimatum either he tells DI Manson or risk being arrested for possession which will ruin his career.

Poppy Lee Frair and Daniel Betts guest star as Kelli and Robert Sutton in this episode.

Retrieved from "https://thebill.fandom.com/wiki/Episode:Ultimatum?oldid=34016"
Community content is available under CC-BY-SA unless otherwise noted.