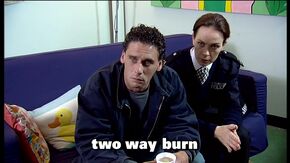 Two young girls are trapped in a house fire, and end up in hospital in a critical condition. When the fire brigade turns up evidence of arson, DCI Meadows is assigned to lead the investigation, with DCs Webb and Spears. Suspicion falls on a loan shark who was seen outside the house just before the fire, then on the girls' father, but ultimately their mother is to blame. Meanwhile, Webb and Spears "light some fires" of their own.

Retrieved from "https://thebill.fandom.com/wiki/Episode:Two_Way_Burn?oldid=35304"
Community content is available under CC-BY-SA unless otherwise noted.