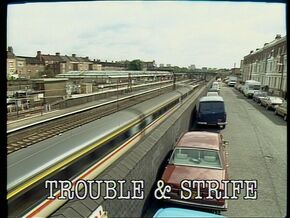 P.C. Haynes and P.C. Ramsey attend a domestic where a pregnant woman, Joanna Mancini, has been beaten by her husband with a bike chain. As Haynes and Ramsey try to calm the Mancinis down, Joanna drives her husband's car into a wall, and he retaliates by dropping appliances, including her sewing machine, television and vacuum cleaner, out of the window. Ramsey breaks into the house, but the husband has disappeared. Ramsey climbs into the loft to look for him, and Antonio jumps him, causing them to fall through the ceiling. When Haynes and Ramsey go to arrest Antonio, Joanna attacks them. Both of them are arrested for assaulting police officers, but as they are being led out, the Mancinis' teenage son arrives....

Retrieved from "https://thebill.fandom.com/wiki/Episode:Trouble_%26_Strife?oldid=34261"
Community content is available under CC-BY-SA unless otherwise noted.