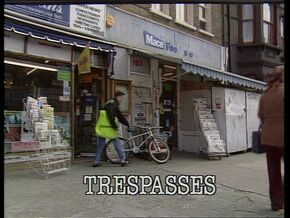 Written By
Christopher Russell
Produced By
Richard Bramall
Directed By
Brian Parker
Episode Chronology:
Previous
Requiem
Next
Save the Last Dance for Me
Trespasses is the 50th episode of The Bill.

P.C. Ramsey investigates noises in a rubbish chute, and finds a newborn baby which he rushes to hospital. In the CAD room, P.C. Haynes and new W.P.C. Brind argue over why anyone would dump a baby.

P.C. Edwards and P.C. Melvin follow up on the theft of items from a church, and Edwards is surprised when Melvin tells him he's a born-again Christian. D.C. Dashwood discovers the church property in an antique shop, and Sgt. Peters and D.C. Carver arrest the culprits in another church. Edwards and Melvin catch a woman removing her property from her ex-husband's house.

Tony Scannell is credited as playing Acting D.I. Roach in the end credits. Roach also refers in this episode to CID being understaffed, which might suggest that this episode was meant to be shown before D.I. Burnside's arrival but was broadcast out of sequence.

Retrieved from "https://thebill.fandom.com/wiki/Episode:Trespasses?oldid=34253"
Community content is available under CC-BY-SA unless otherwise noted.