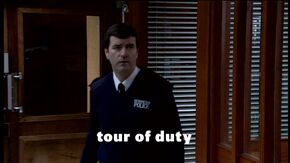 Written By
Stuart Blackburn
Directed By
Albert Barber
Episode Chronology:
Previous
Return of the Hunter
Next
Lies of Silence

Tour of Duty is the 1589th episode of The Bill.

Visiting Sgt. Cryer in hospital, Sgt. Ackland is horrified to find that he doesn't know he has already been replaced at Sun Hill. His replacement is Sgt. Craig Gilmore, transferring from Greater Manchester Police. Gilmore wastes no time in telling the relief that the rumours are true: he is gay. DC Lennox investigates the harassment of a local publican by a gang of youths, but when Gilmore organises a 'beat sweep' of the local estates, they find the publican's daughter is involved with the gang. Her information leads them to an illegal drinking club. After the police raid the club and arrest the gang members, one of them accuses PC Harker of brutality.

Retrieved from "https://thebill.fandom.com/wiki/Episode:Tour_of_Duty?oldid=35612"
Community content is available under CC-BY-SA unless otherwise noted.