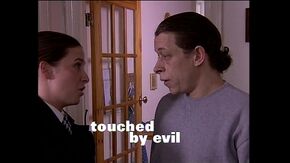 Touched By Evil is the 1579th episode of The Bill.

P.C. Clarke is on attachment to CID, and puts up with the usual teasing from the detectives and her uniform colleagues. She cracks the case she is working on with D.C. Glaze though, when she realises that a series of break-ins are all one surname in the phone book. When Ch. Insp. Conway and D.I. Cullen attend a rugby match between the Met and the Army, Conway is abducted when a disgruntled soldier decides to take revenge on those responsible for the abuse he received while at a children's home.

Retrieved from "https://thebill.fandom.com/wiki/Episode:Touched_By_Evil?oldid=36183"
Community content is available under CC-BY-SA unless otherwise noted.