Start a Wiki
Touch and Go 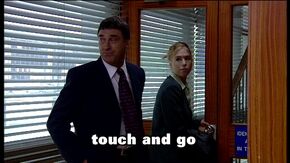 Written By
Neil Clarke
Directed By
Michael Cocker
Episode Chronology:
Previous
Supping With The Devil
Next
Fake Fur
Touch and Go is the 1539th episode of The Bill.

When Rachel Booker, a dancer at one of Howard Fallon's clubs, is brutally attacked, DS Beech is outraged when his mobile number is among her possessions. DS Boulton and DS Stanton find the main suspect is Warren Askew, who was obsessed with Rachel, but he doesn't seem to have been responsible. When Boulton tries calling the phone numbers Rachel had, he is shocked when Beech answers the phone. Beech makes an excuse that he chatted up up Rachel in a bar months earlier, and begs Boulton to overlook that piece of evidence. When Boulton and Stanton's enquiries begin to lead them to Ray Bazzini, Fallon's right-hand man, Beech plants evidence to frame Askew who is arrested for Rachel's murder when she dies, and who hangs himself in his cell.

The teaser sequence is captioned "previously..." but is all new.

Retrieved from "https://thebill.fandom.com/wiki/Episode:Touch_and_Go?oldid=35245"
Community content is available under CC-BY-SA unless otherwise noted.