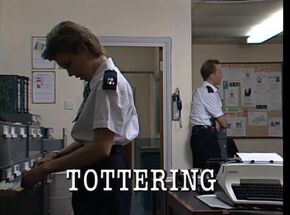 Written By
Simon Moss
Directed By
Chris Lovett
Episode Chronology:
Previous
Greig Versus Taylor
Next
I Counted Them All Out
Tottering is the 161st episode of The Bill

Turnham wants a name from Cathy but annoys her by whistling and then asks Reg who he thinks the suspect is. Cathy is rude to Roach later but he makes her feel better after talking to her. Able and Melvin see a rag and bone cart trotting down the road without a driver. Penny thinks the owner is in the pub. A man fitting the owner's description is found beaten. Reg stops a bloke parked on double yellow line who can't restart his newly purchased second hand car. The man later goes around to his friend who sold him the car and breaks his front window. June and Viv are called into a ladies loo to find a lady trapped by a superglued lock. The old lady gets upset.

Retrieved from "https://thebill.fandom.com/wiki/Episode:Tottering?oldid=34695"
Community content is available under CC-BY-SA unless otherwise noted.