Start a Wiki
Too Little, Too Late 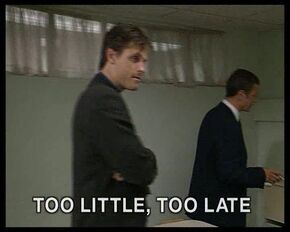 Written By
David Hoskins
Produced By
-
Directed By
Marcus D.F. White
Episode Chronology:
Previous
Shoot the Messenger
Next
Deep End
Too Little, Too Late is the 1356th episode of The Bill.

D.C. Skase and D.S. Daly investigate an assault outside a gay club, but a key witness--who happens to be an off-duty PC from Barton Street--is reluctant to come forward.

This was the final regular half-hour episode (although special episode Episode:289a would also run to thirty minutes). The series was relaunched in the one-hour format the following week.

Retrieved from "https://thebill.fandom.com/wiki/Episode:Too_Little,_Too_Late?oldid=34557"
Community content is available under CC-BY-SA unless otherwise noted.