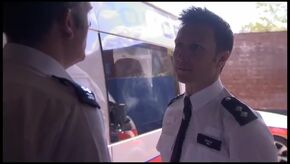 PCs Gayle and Knight try to help a young mother who is being threatened by a local mechanic, but she is too frightened to co-operate. Sgt Stone is determined to prove to his estranged mother that his late father was guilty of raping a probationer twenty years before.

Retrieved from "https://thebill.fandom.com/wiki/Episode:Tombstone?oldid=34032"
Community content is available under CC-BY-SA unless otherwise noted.