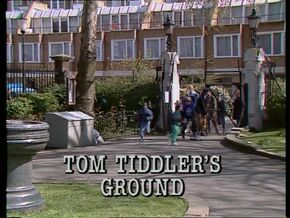 Tom Tiddler's Ground is the 133rd episode of The Bill.

WPCs Ackland and Martella are on park patrol. A lady runs into a shed and locks herself in. A man is looking for his dog that went missing a year ago. DC Carver and Dashwood are watching a man's movements to try and catch his son, who is a villain that DI Burnside is after.

Retrieved from "https://thebill.fandom.com/wiki/Episode:Tom_Tiddler%27s_Ground?oldid=34641"
Community content is available under CC-BY-SA unless otherwise noted.