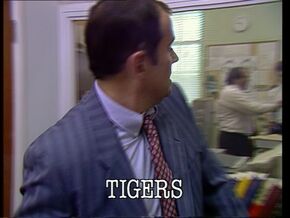 D.I. Burnside receives a 'phone call from an Asian boy who is frightened that a gang from the White Swan pub are planning to attack his father's restaurant. D.C.s Carver and Lines check it out but thir car gets turned over, and the boy ends up in a canal. An old girlfriend of Carver's turns up looking for him with a baby whom she leaves behind.

Retrieved from "https://thebill.fandom.com/wiki/Episode:Tigers?oldid=34307"
Community content is available under CC-BY-SA unless otherwise noted.