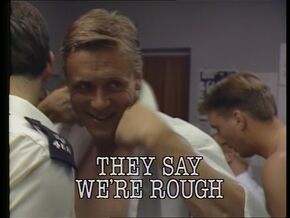 Viv and Ken go to an army surplus store that seems to be being supplied off the back of a lorry. Van used to deliver the gear was nicked from Yorkshire. 2 redcaps (who don't think much of police) turn up to collect squaddies. Cryer doesn't think they are kosher. Cryer wants someone for a p.a. job at local school and asks Ken to buy a flying jacket. An ice-cream van and a car cause a traffic snarl-up near the station. Roach sends a traffic warden to sort it out. Hollis is also sent out to deal with it. After walking around the block, Hollis comes back to find part of a funeral has now joined the bigger traffic jam.

Retrieved from "https://thebill.fandom.com/wiki/Episode:They_Say_We%27re_Rough?oldid=34265"
Community content is available under CC-BY-SA unless otherwise noted.