Start a Wiki
The Visit 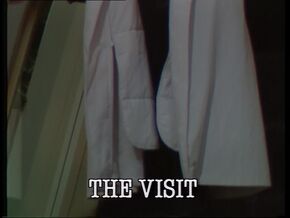 Written By
Barry Appleton
Directed By
Alan Wareing
Episode Chronology:
Previous
Fool's Gold
Next
One For The Ladies

The Visit is the 113th episode of The Bill.

W.P.C. Martella is visiting a remand prisoner and ends up being held hostage. After being released she is told all of his grievances are false. P.C. Melvin watches from a balcony in a shopping precinct as a man is approached by two black men and shot at point-blank range. He had been going to collect a sniper's rifle at Paddington station.

Retrieved from "https://thebill.fandom.com/wiki/Episode:The_Visit?oldid=34601"
Community content is available under CC-BY-SA unless otherwise noted.