Start a Wiki
The Trap 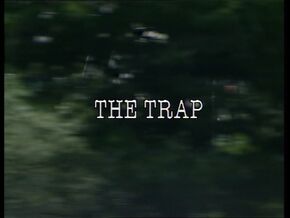 D.I. Burnside sets up a trap on a residential street: an open vanload of video recorders. He, Carver, Roach and Dashwood sit in wait for some villains to take the bait. Eventually, a man pulls up in a BMW and takes one of the videos into his house. Roach and Dashwood arrest him, and back at the station he turns out to be Julian Pembridge, a slimy solicitor well known to Burnside. Pembridge claims he was merely exposing a police entrapment campaign, and manages to escape with a fine. With Sgt. Peters on leave, Sgt. Cryer and Insp. Frazer are concerned about Sgt. Penny's state of mind. Ch. Insp. Conway has a word with him and asks him to take some leave. Penny insists he's fine and refuses, but when the air conditioning breaks down in the CAD room, Penny's temper rises with the temperature. He spills a coffee on his keyboard, and tries to attack the electrician - taking leave is no longer optional.

Retrieved from "https://thebill.fandom.com/wiki/Episode:The_Trap?oldid=34255"
Community content is available under CC-BY-SA unless otherwise noted.