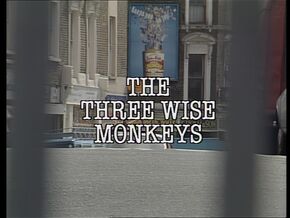 The Three Wise Monkeys is the 37th episode of The Bill

D.S. Ted Roach and D.C. Mike Dashwood are on the trail of armed robbers who have taken a women hostage. Sgt. Penny is starting to stress out because of the guns involved, and his colleagues are concerned about his reaction. Two D.C.s from Somerset arrive to take a prisoner back. P.C. Yorkie Smith and W.P.C. June Ackland chase the robbers with three members of T.S.G. in the back. After being shot at by the robber and nearly shot by one of the T.S.G. officers, Yorkie punches the officer on the nose.

It is confirmed that the new Detective Inspector will be Frank Burnside.

Retrieved from "https://thebill.fandom.com/wiki/Episode:The_Three_Wise_Monkeys?oldid=33755"
Community content is available under CC-BY-SA unless otherwise noted.