Start a Wiki
The Silent Gun 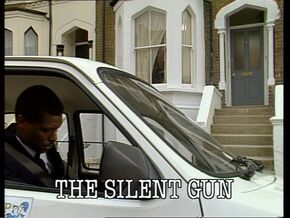 P.C. Haynes arrives at a house to investigate what seems like a routine disturbance. Instead he finds a bailiff who has been shot in the hand while trying to evict the lodger in the upstairs room. Ch. Supt. Brownlow cancels his weekend away and takes charge of the siege, Ch. Insp. Conway and several armed police from Sun Hill and the TSG move in to try and negotiate the gunman's surrender with no response. A Polish interpreter is brought in when it is realised that the man is Polish, not Irish as reported by the landlady. There is still no response, and a local shopkeeper tells P.C. Smith that the man, Lublin, is also deaf. With no chance of him hearing them approach, armed police and a police dog storm the room and arrest the man. The local residents are getting antsy about being denied access to their homes. P.C. Edwards is sent to turn a woman's oven off, but he breaks into the wrong house. It appears from this episode that Ch. Insp. Derek Conway also has a "pink card" (firearms license), in addition to D.I. Burnside, Sgt. Cryer, D.C. Dashwood and P.C. Stamp (Running Late).

Retrieved from "https://thebill.fandom.com/wiki/Episode:The_Silent_Gun?oldid=34301"
Community content is available under CC-BY-SA unless otherwise noted.