Start a Wiki
The Sacred Seal 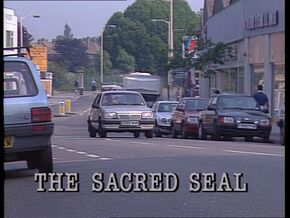 Sgt. Peters puts out a call about an armed robbery in progress at a store. D.C. Carver follows the suspect, picking up an abandoned starting pistol, but loses him outside a church. A priest is found holding the money after the suspect leaves during confession. Carver later arrests the suspect, who is convinced that the priest grassed him up, and the church is vandalised. P.C. Edwards is moaning to P.C. Garfield about the inefficiency of the Crown Prosecution Service when they notice two men fighting over dogs in a car. The owner of the car has put his vicious rottweilers in it to prevent it being repossessed. A young boy can control dogs. The repossession man turns out to be bogus and is caught respraying cars.

Retrieved from "https://thebill.fandom.com/wiki/Episode:The_Sacred_Seal?oldid=34653"
Community content is available under CC-BY-SA unless otherwise noted.