Start a Wiki
The River 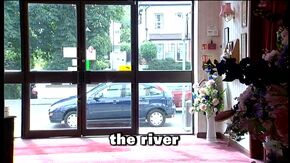 Written By
Steve Griffiths
Directed By
Richard Holthouse
Episode Chronology:
Previous
Fifty-Fifty
Next
All Fall Down, Part One
The River is the 1544th episode of The Bill.

Beech, Stanton and Hodges set up the operation to capture gangster Howard Fallon, his associate Ray Bazzini and two corrupt Drug Squad officers, DI Tasker and DS Garrard. Don and Maggie conspire to take all Fallon's cash for a drug deal with an American drug smuggler, and Don tries to trick Tasker and Garrard into double crossing Fallon and Bazzini.

Stanton takes Beech to John's funeral. Whilst there, Stanton is called by Tasker and Garrard, and she discovers Beech asked Tasker and Garrard to source guns for the meet, and she furiously throws him back to an angry Hodges. Beech has just the right trick up his sleeve, Tasker and Garrard's DCI is in on the scam, and an excited Hodges foolishly allows Beech to go into the job and he briefs his team and SO19, despite warnings from Stanton.

As Bazzini and Fallon take Beech to meet the supplier, Beech conspicuously unloads the cash from the briefcase and leaves it under Bazzini's car. As Fallon, Bazzini and the supplier leave, Maggie shows up to collect the cash.

At the meet, as soon as the drugs are unloaded, Bazzini and Fallon turn on Beech, but Tasker and Garrard show up and tie up the gangsters. As soon as they are all tied up, Beech steals Tasker's gun and knocks him and Garrard out. Fallon is not surprised but when Beech turns the gun on him, Fallon pleads with him. A gunshot rings out, but when SO19 storm the building, all the gangsters are tied up, and the only thing remaining is the empty cash case with Beech's tracker inside. Hodges furiously demands they find Beech, and Stanton furiously tells Hodges that Beech wasn't to be trusted.

Maggie escapes when police shows up but Beech safely escapes.

Retrieved from "https://thebill.fandom.com/wiki/Episode:The_River?oldid=35233"
Community content is available under CC-BY-SA unless otherwise noted.