Start a Wiki
The Quick and The Dead 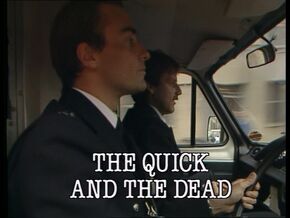 Written By
Christopher Russell
Directed By
Philip Casson
Episode Chronology:
Previous
The Coop
Next
Witness
The Quick and the Dead is the 62nd episode of The Bill.

Sgt. Peters attends a physical fitness evaluation, but does not do too well. P.C. Ramsey and P.C. Frank give chase when they witness a robbery. The robbers escape, but they manage to arrest the driver, who insists his car was hijacked. Ramsey interrogates the boy, but Ch. Insp. Conway intevenes when Ramsey's heavy-handed approach becomes apparent. Conway releases the boy when he admits he was on his way to a job interview - as a male stripper. W.P.C. Ackland investigates the theft of a cat's gravestone, and finds it in the elderly cat-owner's retirement home. A corpse goes missing when an undertaker's van is stolen by yobs, but P.C. Melvin tracks it down. Ramsey is giving everyone else a hard time about their fitness tests as he think's he's the fittest guy at the station, but when it comes to his test, he cannot take it due to high blood pressure.

Retrieved from "https://thebill.fandom.com/wiki/Episode:The_Quick_and_The_Dead?oldid=34273"
Community content is available under CC-BY-SA unless otherwise noted.