Start a Wiki
The Price You Pay 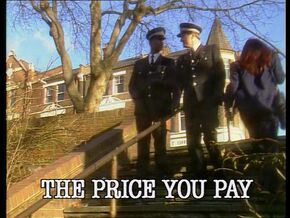 Written By
Kieran Prendiville
Directed By
Keith Washington
Episode Chronology:
Previous
N.F.A.
Next
The Key of The Door

The Price You Pay is the 95th episode of The Bill.

W.P.C. Martella visits a friend of hers, Alison Page, who has been badly beaten up. Alison is on the game, and her attacker was a client. D.S. Roach arrests the man, but he is a diplomat and the Home Office demands his release. D.I. Burnside tells Roach to warn Alison's father, George Page, not to do anything stupid, but when the diplomat is beaten up, it is clear Roach did nothing to stop him. P.C. Stamp and P.C. Haynes investigate when a bookie claims his door has been glued shut. His disgruntled clients claim he hasn't paid their winnings, but Stamp convinces them to go double or quits. The relief bets on the same dog, and it wins the race.

This is my first sighting of Victor Gallucci as D.C. Tom Baker (AKA "Trev"). He is sitting in the canteen when Martella confronts Roach.

Retrieved from "https://thebill.fandom.com/wiki/Episode:The_Price_You_Pay?oldid=34540"
Community content is available under CC-BY-SA unless otherwise noted.