Start a Wiki
The One That Got Away 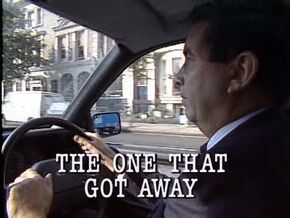 Written By
Jonathan Rich
Directed By
David Attwood
Episode Chronology:
Previous
The Tourist Trap
Next
Found Offending
The One That Got Away is the 166th episode of The Bill.

Ch. Supt. Brownlow is driving when he notices a car being driven erratically. He gives chase and catches the driver, but as his radio is in his car he can't reveal his location. The driver manages to escape by stealing Brownlow's car. He turns out to be D.S. Roach's informant, and the getaway driver for an armed robbery. D.I. Burnside is off work with a bad back, so Roach takes charge of the stakeout of the robbery, letting his informant escape.

W.P.C. Ackland and W.P.C. Martella are walking the beat. They are followed by a man who invites June out. The man is later arrested.

Retrieved from "https://thebill.fandom.com/wiki/Episode:The_One_That_Got_Away?oldid=36067"
Community content is available under CC-BY-SA unless otherwise noted.