Start a Wiki
The Night Before 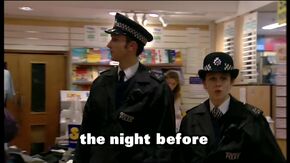 Written By
Richard Stoneman
Directed By
Chris Lovett
Episode Chronology:
Previous
Bad For Your Health Part One
Next
The Morning After
The Night Before is the 1562nd episode of The Bill.

P.C. Smith becomes a knight in shining armour for a shop assistant when he and P.C. Rickman apprehend a shoplifter--with a little help from Santa. D.S. McAllister maliciously ruins P.C. Hollis's plans for the Sun Hill Christmas Party, forcing him to find another venue at the last minute. The party turns sour after Smith manages to provoke a fight with a nightclub bouncer, and when P.C. Quinnan tends to an injured P.C. Page, they end up in bed together.

Retrieved from "https://thebill.fandom.com/wiki/Episode:The_Night_Before?oldid=35315"
Community content is available under CC-BY-SA unless otherwise noted.