Start a Wiki
The New Order of Things 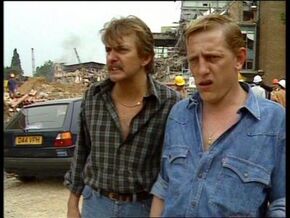 Written By
Geoff McQueen
Produced By
Peter Cregeen
Directed By
Michael Ferguson
Episode Chronology:
Previous
The Chief Super's Party
Next
Some You Win, Some You Lose

The New Order of Things is the 24th episode of The Bill.

Sgts. Peters and Penny apprehend a man standing outside the station waiting to attack P.C. Muswell (who had left the force six months previously).

P.C. Jim Carver begins his CID training by working on an all night obbo with D.S. Ted Roach. Due to Carver's inexperience and Roach's lax attitude, they both miss a flatbed trailer stealing a digger from a building site. Roach and Carver follow up their suspicions about the site security guard, and find he has stolen the equipment.

Back at Sun Hill, D.I. Roy Galloway is being investigated by the Home Office for allegedly forcing a confession from a murder suspect under duress at his last posting. Galloway is cleared of wrongdoing due to lack of evidence, but Ch. Supt. Brownlow warns him that his old-school policing methods may be his undoing.

In a suprising turn of events, one of P.C. Reg Hollis's rare walks on the beat with W.P.C. June Ackland leads to him apprehending an armed gunman single-handedly from the Sun Hill D.H.S.S. office.

W.P.C. Martella manages to talk down a woman threatening to throw herself off a block of flats as she has just discovered she has AIDS.

Retrieved from "https://thebill.fandom.com/wiki/Episode:The_New_Order_of_Things?oldid=32937"
Community content is available under CC-BY-SA unless otherwise noted.