Start a Wiki
The Mugging and The Gypsies 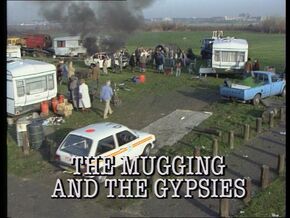 Written By
David Halliwell
Directed By
Barry Davis
Episode Chronology:
Previous
One To One
Next
The Chain of Command

The Mugging and The Gypsies is the 87th episode of The Bill.

W.P.C. Ackland and P.C. Smith attend a disturbance at a gypsy campsite, where local residents are complaining. A social worker has a Place of Safety Order on one of the gypsy children, Theresa Beecher, who was reportedly beaten by her parents. When the girl and her parents lock themselves in the caravan, Smith has the idea of towing the caravan to the station. The gypsies make a run for it, but when the little girl is taken into care, it is found the Beechers have swapped their daughter with another little girl.

W.P.C. Martella and P.C. Melvin arrest a youth suspected of cheque fraud. When he is found in possession of stolen credit cards, Martella and D.C. Lines investigate. The owner of the cards is located and confirms he was attacked and robbed the night before. He is about to attend an identity parade, but his wife admits she was the one who hit him.

Retrieved from "https://thebill.fandom.com/wiki/Episode:The_Mugging_and_The_Gypsies?oldid=34323"
Community content is available under CC-BY-SA unless otherwise noted.