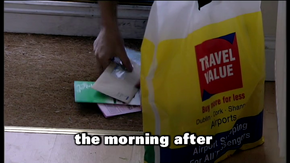 The Morning After is the 1563rd episode of The Bill.

Sun Hill returns to normal after the Christmas break, although P.C. Quinnan and P.C. Page are acting suspiciously. As the pair try to rekindle their affair, D.C. Lennox and D.C. Webb investigate the assault on a shop assistant, and discover it was actually a pair of crooked security guards who were responsible. Page and P.C. Hagen have a minor PolAcc in the station yard. Hagen figures out what is happening between Page and Quinnan, but when she tries to tell P.C. Stamp, he accuses her of trying to get back at Page for the accident.

Retrieved from "https://thebill.fandom.com/wiki/Episode:The_Morning_After_(2000)?oldid=35321"
Community content is available under CC-BY-SA unless otherwise noted.