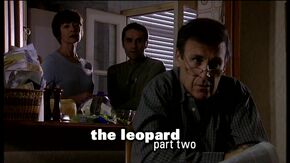 Written By
Stephen Plaice
Directed By
John Dower
Episode Chronology:
Previous
The Leopard, Part One
Next
Tolerance, Part One

The Leopard: Part Two is the 1581st episode of The Bill.

PC Nick Klein is offered the position of partnership officer, but he is shunned by the relief, who think he grassed up PC Dale 'Smithy' Smith to get the job. With Nick's help, Smithy infiltrates the gang of youths intimidating the local residents, and discovers that property developers Mather & Devine are indeed behind the harassment.

Meanwhile, Sgt. Bob Cryer uncovers the fact that Kennedy was a notorious East End gangster named Ken Franklin who stored weapons for the Kray brothers, and that Kennedy's claim of shooting in self-defence is disproved by the forensic evidence and a statement from the other gang member. Smithy is re-instated and Supt. Tom Chandler approves his transfer to SO19, although he admits to DI Cullen this is just to get rid of him. Meanwhile, Klein turns down the partnership officer job.

Retrieved from "https://thebill.fandom.com/wiki/Episode:The_Leopard,_Part_Two?oldid=36145"
Community content is available under CC-BY-SA unless otherwise noted.