Start a Wiki
The Key of The Door 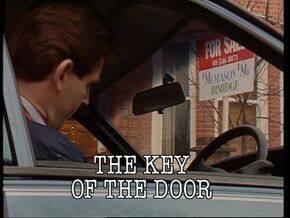 The Key of The Door is the 96th episode of The Bill.

D.C. Dashwood investigates when a house which has recently been put on the market is burgled. He suspects that some prospective buyers are behind it, and gets a description of the couple who have looked at the houses from the real estate agents. The culprits turn out to be known to D.I. Burnside, and they are passing on details of the house to their son, who breaks in later. Sgt. Cryer chases a mugger, and takes the victim home to her flat which looks like it has been burgled. It turns out her son is the culprit, and he has been abusing her for a long time. Cryer gives the boy a warning, but arrests him when he returns to the flat to find the boy assaulting his mother. P.C. Ramsey is determined to catch a disqualified driver. Cryer tells him to chalk the footpath, but Ramsey has more luck by putting a stone on the wheel.

Retrieved from "https://thebill.fandom.com/wiki/Episode:The_Key_of_The_Door?oldid=34542"
Community content is available under CC-BY-SA unless otherwise noted.