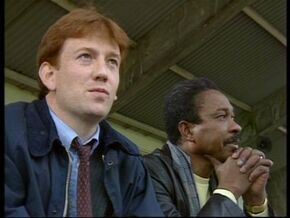 Written By
Barry Appleton
Produced By
Michael Chapman
Directed By
John Woods
Episode Chronology:
Previous
It's Not Such A Bad Job After All
Next
A Dangerous Breed

The Drugs Raid is the 6th episode of The Bill.

After a residents' meeting complaining about the drug problem on their estate, Galloway mentions that he had heard that an old illegal club has reopened in an abandoned theatre complex - this time dealing drugs. He asks a parent, Tombo Robinson (Norman Beaton), who used to be involved in the club, if he will infiltrate it to confirm Galloway's suspicions. Tombo reluctantly agrees, and meets with Galloway to tell him that a huge drug deal is going down that afternoon. Galloway quickly arranges a warrant, and sets about organising a huge raid on the club. The raid runs according to plan, but Tombo is stabbed by a dealer as he tries to let the police into the building. Taffy and Jim give chase to the dealer, but are alarmed when the suspect speeds off in a car bearing diplomatic plates. Galloway checks up on Tombo in hospital, and is shocked to discover that he has died, and was a heroin addict. Returning to the station, Galloway is furious when Brownlow, a Home Office representative, and a diplomat from a small African nation request he relinquish the case to the government on diplomatic grounds.

Retrieved from "https://thebill.fandom.com/wiki/Episode:The_Drugs_Raid?oldid=32723"
Community content is available under CC-BY-SA unless otherwise noted.